If you’re looking to start the New Year in one of the best cities in the U.S., the staff at Niche.com has done the legwork for you. Moreover, if you already live in Texas, then you’re one stop closer to getting to that prized town.

Niche.com recently released their list of the Best Cities in the U.S., using information on high-quality public schools, affordable costs of living, low crime rates and the overall satisfaction of city residents, based on data from the U.S. Department of Education, the Census Bureau, the FBI and public-sentiment polling.

The outlet also looked at a number of other variables, including local commutes, such as length and access to public transportation; diversity in age, gender and ethnicity; health and fitness, using data on rates of smoking, alcoholism, obesity and access to healthcare and fitness areas; jobs, including employment rates; and housing costs using data on home values, ownership rates, property taxes and more. The study also only considered major cities, meaning spots with a population of more than 100,000.

So, what’s the best city to live in all of America? According to the study, The Woodlands, Texas, if No. 1. The city has a population of 113,819 and is located in Montgomery County.

Here are the top 10 best cities to live in America, according to Niche.com: 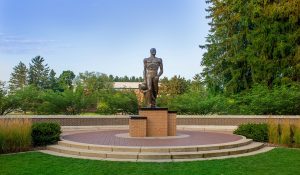